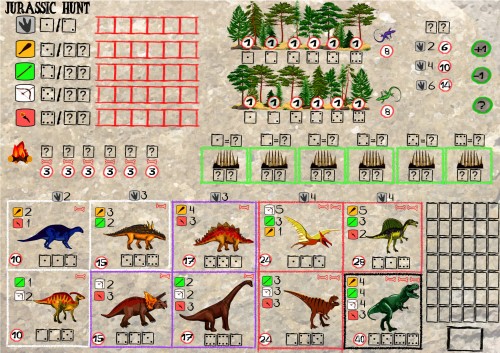 Assemble the best team of hunters and hunt dinosaurs. Worker placement mechanic in a roll&write

game. Roll&write game in which we direct a team of hunter cavemen. Using a pool of dice we recruit

different types of cavemen and track down dinosaurs. It is based largely on worker-placement

mechanics. Requires long-term planning. Each turn we use a pool of 6 D6 dice. Using them we

recruit: trackers, mace makers, archers, spearmen, torches.Each dinosaur in the game can be

defeated when attacked by a group consisting of certain cavemen (e.g. 2 mahouts and 1 archer)

the hunt. Additionally, we can make hunting easier by setting up traps (by using dice with certain

values). The game ends after 7 turns after which the points are counted.

up
Shop is in view mode
View full version of the site
Sklep internetowy Shoper.pl